Run Against the Machine – Collingswood Together – Delany, Johnson, and Rossi 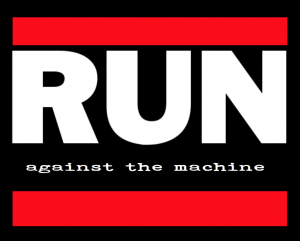 Our first Run Against the Machine profile of 2021 features the Collingswood Together team of Kate Delany, Bill Johnson and Jen Rossi who have combined their forces to take on the notorious South Jersey Norcross Machine to win progressive power for the people of their city of Collingswood.

By winning all three seats on the Board of Commissioners, Collingswood Together will break the three decade stranglehold of Mayor Jim Maley and bring transparency, justice and participation to a city starving for all three.

Thank you for taking part in this interview!  Please introduce the Collingswood Together team. 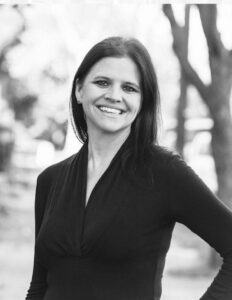 Kate Delany, age 41, is a writer, educator and community organizer. Mother of two, she is an avid reader, gardener, and fundraiser for the Cystic Fibrosis Foundation (CFF). Kate is a lifelong resident of South Jersey and has been a resident of Collingswood since 2007.  Kate is President of the Collingswood Educational Advocacy Group (CEAG), a local non-profit that focuses on issues impacting schools, students & caregivers.  Kate is on the board of the Good Government Coalition of New Jersey (GGCNJ), an organization focusing on fair ballot design, accountability and transparency. Kate is Municipal Chair of the Collingswood Democratic Committee, a team of 16 who won off the line in 2019, taking over the local Democratic Party. Kate is President of the South Jersey Progressive Democrats, an organization advocating for progressive causes and an end to machine politics in South Jersey. An ardent environmentalist, Kate partners with Food and Water Watch, Delaware Riverkeepers Network and TriCounty Sustainability Alliance. 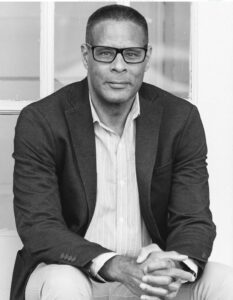 Bill Johnson, age 60, has been a resident of Collingswood for nearly twenty years. Bill is the father of five children (4 girls and a boy) and is married to a college educator. Bill has been a career scientist for over 20 years, working for two of the top five pharmaceutical and OTC product companies. A runner, swimmer and cyclist, Bill is an endurance athlete and Tri-Athlete. Bill is also a coach, active in the local rec programs in Collingswood and has been instrumental in the youth travel soccer program and swim team. Bill volunteers as a mentor for African American young men. Bill is on the leadership team of the organization Embracing Race: the Conversation which is focused on addressing systemic racism and advocating for measures such as implementation of the Amistad Curriculum and justice in policing. Bill also serves on the Environmental Justice committee of TriCounty Sustainability Alliance. He is a member of Collingswood Democratic Committee and is on the steering committee of South Jersey Progressive Democrats. 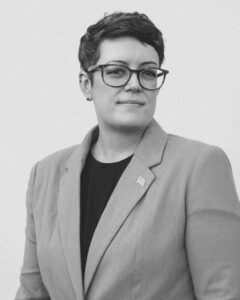 Jen Rossi, age 39, is a Collingswood mom who has called the town home for nine years.  Jen is the Vice President of the Collingswood Educational Advocacy Group (CEAG) and live-streams the local Board of Education meetings in order to keep community members better informed of issues occurring and decisions being made. Jen is a troop leader with the Girl Scouts of Central and Southern New Jersey and also volunteers for the National Leadership Council for Navigators USA, a scouting organization open to kids of all genders. As a founder of the group Collingswood Neighbors for Change, Jen has distributed notes and video recordings of local Board of Commissioners meetings. Jen is well-known for her efforts to keep our local parks safe and clean.

For those unfamiliar with Collingswood and the way the local government works, can you briefly describe the commissioner role? One of you gets to be Mayor, right?

Our town is a Walsh Act town, one of a very limited number statewide to utilize a three person board of commissioners. In this form of government, the leaders, rather than the public, pick the Mayor. All three commissioners run on four year concurrent terms. We believe this very tightly consolidated form of government is one of the reasons our Mayor has been in office for 32 years, because in Walsh Act towns the leadership tends to become ossified and entrenched, more so than in towns with slightly larger town councils and members who run on staggered terms. According to our population size, Collingswood should have a five person board of commission.

Our current Mayor … parlayed his gift for eminent domain seizures locally to make a fortunate regionally. His work has involved displacing communities of color, veterans and stockpiling land for future development projects.

Your website places an emphasis on transparency in town government and refers to the current administration’s relationship with the notoriously corrupt South Jersey political machine. Can you provide some recent, specific examples of how this relationship and lack of transparency has hurt Collingswood residents?

Our current Mayor is tied into the South Jersey machine and previously worked for Parker McCay, the law firm of Phillip Norcross, brother of George Norcross. Like all Camden County municipalities, our town contracts with Conner Strong and Buckelew, George Norcross’s firm, for municipal insurance. This hefty contract is handled by the shadowy Camden County Joint Insurance Fund; and our current Mayor is on the executive board of this patronage pit. In 2006, our Mayor ran a pro- pay-to-play campaign to protect the patronage system that is so beneficial to the South Jersey machine. We are the only town out of all 37 Camden County municipalities that does not hold caucus sessions so residents can observe their government’s deliberative process. Residents are kept in the dark about town financial decisions, leaving many surprised to learn that we are one of just ten towns in the entire state with a net debt of over 3%.

Another major campaign theme related to the above is the confluence of environmental and development issues which impact many small towns in New Jersey – how would you contrast your team’s vision on development and environmental issues with the incumbents?

Our current Mayor has used public office for personal and professional gain. In 1993, new local housing and redevelopment legislation was passed that allows municipalities to more speedily designate property as blighted and in need of redevelopment. This clears the way for municipalities to seize land via eminent domain, contract with developers without going out to bid, and authorize tax abatements.  Our current Mayor did this so often in Collingswood that he was recruited to do the same for Parker McCay. He parlayed his gift for eminent domain seizures locally to make a fortunate regionally. His work has involved displacing communities of color, veterans and stockpiling land for future development projects.

Our approach to public projects would be very different. We would operate transparently and put the needs and concerns of residents first. We would utilize a social impact calculator to holistically weigh the return on investment for public projects, assessing items such as health and safety, equity, and environmental impact. We believe it is important to work at paying down our hefty municipal debt so future generations aren’t shouldering the load. We believe the public should have a role in how public money is spent and would utilize participatory budgeting.

Statewide progressives frequently complain about the damage down to democracy by the South Jersey machine. Camden County is the heart of the machine and real competitive elections are rare here. We want to change that, to put power back in the hands of voters, to have conversations that matter about the future of our community.

Other than the above, what are the top three things that would change about Collingswood if your team is elected as commissioners? 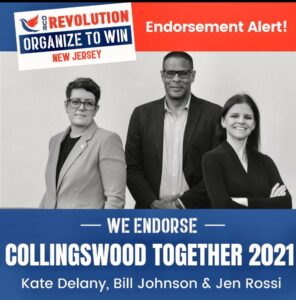 We note that your campaign has been endorsed by Collingswood Municipal Democratic Committee and Our Revolution – New Jersey. Despite these strong endorsements, you are running against a fairly entrenched leadership in the May 11th election. How would you rate your own chances to win the election – and why should progressive donors and volunteers throughout NJ support your campaign in particular?

This is not the first time that Kate and Bill have run against the machine.  They did so in June 2019. As the President of South Jersey Progressive Democrats, much of Kate’s organizing is aimed at chipping away at entrenched regional forces to make headway towards more democratic leadership and progressive change. We believe we can win and welcome all the support we can get from fellow progressives.  Statewide progressives frequently complain about the damage down to democracy by the South Jersey machine. Camden County is the heart of the machine and real competitive elections are rare here. We want to change that, to put power back in the hands of voters, to have conversations that matter about the future of our community.

Finally, can you tell us a little about your strategy for the campaign – particularly as we are still in the midst of the COVID-19 pandemic? How can progressives both in and out of Collingswood support your campaign?

We can’t say too much since our opponents stalk our social media sites.  However, real, deep engagement with our community is something we are doing now and is nothing new for us. We are plugged in to advocacy efforts and in community groups. Talking with our neighbors is of the utmost importance to us. Supporters can donate via ActBlue. Anyone interested in volunteering can contact us on our website, or reach out to Kate via email.

Thanks for giving us the opportunity to share our ideas!