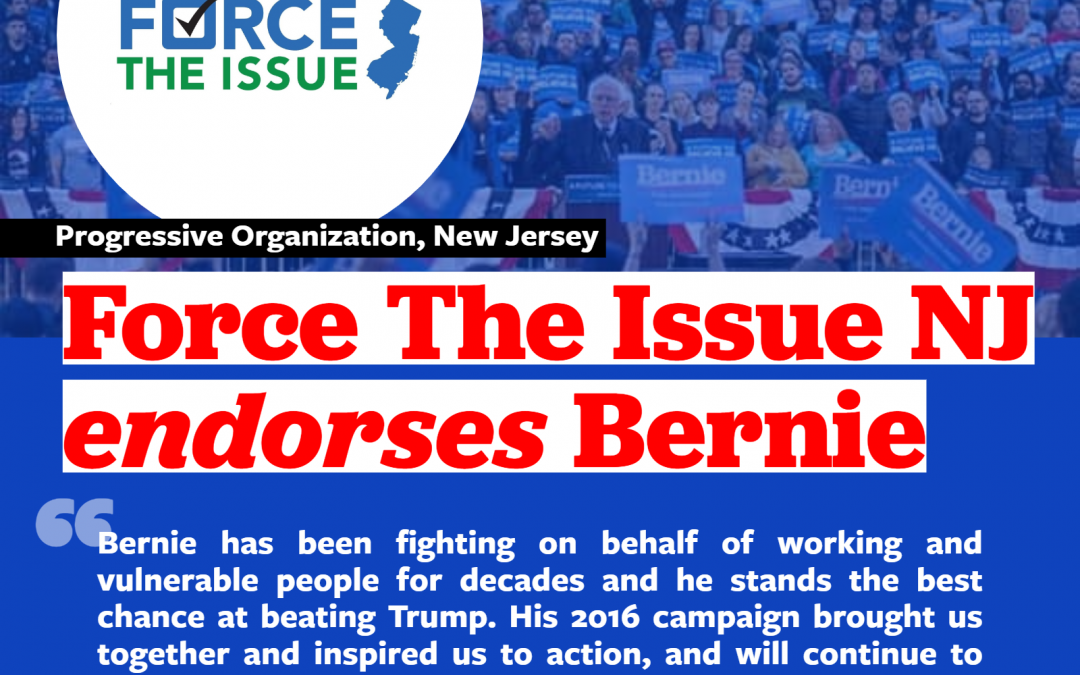 In the midst of the most consequential presidential election in recent history, we are faced with a president, who, if reelected, would oversee an even greater increase in the suffering and disenfranchisement of vulnerable people via the expansion of mass detention of migrants, through the slashing of social programs, through the stoking of racial and religious animosity, through the further rollback of environmental protections, through the further deprivation of federal resources via tax breaks to the wealthy, and by ensuring that humane and transparent governance is hamstrung for decades to come through a reshaping of federal courts.

It is imperative that Trump and Trumpism is defeated in November.

It is critical that the Democratic nominee has the credibility to offer a real and stark contrast with the forces that brought Trump to power.

That is why Force the Issue NJ endorses the nomination of Bernie Sanders for President.

Bernie’s record on the issues is impressive, and his policy vision is transformative, as we’ll further detail below.

But even more impressive is his history of electability.

Webster’s Dictionary defines electable as “capable of being elected (as to public office)”. With NO institutional support, against ALL odds, and in the face of furious (and often bipartisan) opposition, Bernie has proven his electability repeatedly:

Our current understanding of Vermont as “The People’s Republic”, a solid “blue state,” and an incubator of progressive ideals and policy wasn’t an accident or coincidence.  Bernie Sanders and the movement he inspired made it that way.

In 2016, again facing strong opposition, Bernie Sanders won 23 primary and caucus contests by mobilizing and financing an upstart campaign that went from zero to 44% of all pledged delegates (13M votes) in the space of 12 months.

In 2020, in a much more competitive field and with his 2016 base of support divided between Senator Elizabeth Warren and himself, and following a minor heart attack, Senator Sanders nevertheless persisted and is now face to face with former Vice President Biden for the Democratic Party’s nomination.  Biden’s delegate lead at present is a challenge, but it is much smaller than the leads Hillary Clinton held throughout the 2016 contest.

But can he beat Trump?

We have chosen to endorse Senator Sanders, not only for his consistency and his vision, but because Bernie Sanders is the strongest candidate to beat Trump in November.

Bernie has consistently beaten Trump in polling and – with the support of the Democratic Party and amazing progressive organizations throughout the country – can harness the enthusiasm to inspire infrequent voters to join regular Democratic voters to vote in November.

As partisanship has increased, American elections have become more about mobilizing both partisan and independent supporters than enticing an ever-shrinking pool of unpredictable undecided voters with weak feints of civility and milquetoast moderation. Rather, a powerful vision presented with passion and energy by a multiracial and multigenerational coalition will inspire liberals, progressives, and leftists alike while demonstrating a moral clarity that will challenge and compel moderate and centrist voters to decide in favor of which version of America they want to fight for – Bernie’s American dream based on justice, compassion and equity or an Trump’s American nightmare steeped in bigotry, cruelty and corruption.

Bernie’s Yearning – A Platform for Progress

Bernie has been fighting for that bold vision for decades, and has been on the right side of history on nearly every major issue for the past half century.  His passion for justice was inspired by his working class, immigrant family upbringing, the loss of his extended family in the Holocaust and of course, one of history’s most hated acts of corporate malfeasance, the relocation of his beloved Brooklyn Dodgers.

His first election was for high school student body president.  His main platform plank had nothing to do with school dances, cafeteria food, or dress code.  It was raising money for Korean War orphans.

Bernie spent so much time leading on and fighting for civil rights as the chairman of the University of Chicago’s Congress of Racial Equality (CORE) and Student Nonviolent Coordinating Commitee (SNCC), he almost had to drop out of school due to poor grades.  This informed his initial foray into Democratic primary politics to support the Presidential campaign of Jesse Jackson (he was slapped in the face for his troubles). Joe Biden exaggerated or fabricated his civil rights record and was an ally to segregationists.

Despite having no leverage as a independent, democratic socialist member of a Republican House of Representatives, Bernie was dubbed “The Amendment King” for passing more roll-call amendments than any other member of Congress.  This well-earned reputation for exploiting every possible avenue for effecting change continued during his tenure in the Senate.

Among his major accomplishments was the bipartisan effort he led with Senator John McCain to increase veterans’ benefits, securing $11 BILLION dollars in funding for Community Health Centers as part of the Affordable Care Act, and leading a bipartisan effort in the Senate, ultimately unsuccessful – but also unprecedented – to enforce the War Powers Act against the Trump Administration for its support of Saudi Arabia’s war on Yemen.

About 650,000 New Jersey residents have no health insurance, and many more are under-insured. Even those who do have adequate insurance can lose it if they leave their job or their employer decides to change it, and have to spend countless hours arguing with health insurance companies and providers for medically necessary treatment. Bernie’s Medicare for All will replace this dysfunctional for-profit system with one that puts people’s health needs first.

Climate change is already reshaping the state of New Jersey and these changes are only going to get more extreme and dire if major action is not taken immediately. Bernie’s Green New Deal treats climate change with the seriousness it requires. Half measures on addressing the climate crisis are not going to cut it – for New Jersey or the rest of the planet.

Student debt in New Jersey has over-doubled in ten years, and it continues to balloon. Students are straddled with debt that will follow them for decades, simply for getting an education. Canceling student debt and making public colleges and universities tuition free will free people from this burden and allow New Jerseyans to get an education without worrying about the decades-long drain it would place on their futures.

His record on a Pro-Choice issues is impeccable, where Joe Biden is all over the place.

Bernie Sanders is a much stronger ally and advocate for the LGBTQ+ community than Joe Biden – and he has been since long before most Democrats would even mention the issue in public.

Ditto on issues of war and peace, the environment, marijuana legalization and literally, we can Google and hyperlink forever.  Criminal justice reform, the expansion of workplace democracy, a racial justice plan, a robust housing plan, a $15 minimum wage, and immigration reform all have the potential to transform millions of lives for the better.

And for those asking, “how’s he going to pay for all of that?

Here is your answer.

The bottom-line – whether you call it a “political revolution” or “big, structural change” – the progressive platform of Bernie Sanders is ambitious, credible, and worth voting for and fighting for.

Like Bernie, we recognize that none of this campaign’s lofty goals can happen unless people work for them. No meaningful change in the United States has happened without struggle. Bernie’s approach to politics stresses inclusive and collaborative action, and his goal in becoming the “Organizer in Chief” is to facilitate our power to achieve our goals.

The Board of Force The Issue NJ has seen firsthand what Bernie’s focus on building a movement means. The members of the Board met through organizing for Bernie’s 2016 presidential campaign, motivated by a common vision for a just and equitable country.  Force The Issue NJ would not exist if it were not for Bernie Sanders. We were inspired to spend countless hours flyering, knocking on doors, hosting events, organizing volunteers, and calling voters for Bernie’s campaign in 2016. We are proud to say that – according to campaign staff – the 20,000 voter contacts we made with our allies was by far the most in New Jersey.

We hope that you also will be inspired to take action to help Bernie Sanders win the Democratic nomination and take the fight to Trump in November.

We invite those who share in our progressive vision for the future, including all of our fellow Warren Democrats, to consider joining this campaign.

Given the competitive state of the race at present, New Jersey progressive activists and voters may – for once – have an out-sized role in determining the Democratic party’s nominee.

We hope you join us in supporting Bernie’s campaign in any or all of the following ways:

This is the first in a series of endorsements that Force The Issue NJ will be making over the coming months for the June primary election in New Jersey.